Christian political operative Ralph Reed appeared on Bill Maher’s show last week to share an interesting observation. He claimed that the founding fathers argued a lot and what we ended up with was not so much a consensus but a compromise of ideas. That may be true, but those having a say were all white men, wealthy landowners and self-professed Christians. Whatever compromises were made did not harm them individually or collectively. These are facts.

So, now that we are closing in on nine months of Joe Biden’s presidency, many have forgotten the daily chaos that Donald Trump created just by opening his little round mouth or tweeting out lies each and every day. I believe that in the not-too-distant future average Americans will have forgotten all about the Afghanistan war and its cause. The withdrawal from Afghanistan was certainly not one of our shining moments and, let’s be honest, fighting there for twenty years was our collective sin. Nothing good will happen in that country now that we have left, but that’s based on our own definition of “good.” 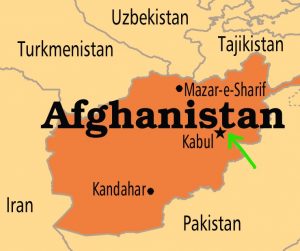 It’s not Joe Biden’s fault that we got into Afghanistan and it’s not his fault that we stayed there so long, but Joe will take the hit for a shitty drawdown that was more escape than extraction. I think those using the word “retreat” don’t understand it’s meaning, but it seems to me that Republicans often vote for war then soon are opposed to the very war they started. The lame-ass, hypocritical statements being made by many members of the GOP are dreadful and dishonest.

People are going to investigate and analyze in an attempt to find forensic proof that Joe Biden, through a cabal of scheming deep-state operatives, was singularly responsible for more than a dozen US forces being killed at the Abby gate of the Kabul Airport. Now we must suffer those who will blame others for those things they created in the first place.

So, go ahead. Blame Joe for everything you don’t like about America. But somewhere along the line you must answer one basic question. Is what you are doing making America great again? If you think that outlawing abortions by way of citizen arrests and sending kids and teachers back into more Covid is a good thing, then you need to have your head fixed. You cannot be serious that the election was stolen. You cannot truly believe there are chips in the vaccines. A corpse might move a leg now and again but would never believe any of that QAnon shit.

Right now, the media folks just want to keep your attention. They pursue the golden rule of ratings and understand the powerful pull of drama and conflict. Sure, rev up the old “fair and balanced” positioning of your programming to blast away at our president’s administration. Biden’s whole staff are sitting ducks, but they don’t need you to understand every “why” and they certainly don’t need your pity. They hold the nuclear codes with solid awareness that their number one job is protecting the nation. Biden and company are running the show now, and if you continue to scream and post horse manure you will lose all credibility with the thinking people of America. So go ahead and take your cow de-wormer meds to be safe from the Delta variant, but don’t be surprised if it retards whatever is left of your brain.

One of my neighbors, a former military man, said this, “He’s the President, the Commander in Chief, you have to respect him.” He was speaking about Donald Trump, but why doesn’t leader of the free world Joe Biden deserve that? Some spoke about respect when the least respectful person imaginable sat in the White House, but now you want to hang a guy who made the right decision to end a stupid, fruitless war? You are exactly who George Washington, Thomas Jefferson and John Adams warned us about, a person who holds loyalty to something other than our country and our remarkable Constitution. After you take your last breath on this earth, no one will be reading your posts.

We were asked to give Donald Trump a chance and get beyond his political rhetoric, but the 45th President made every comment and decision to please a base of buffoons who can hardly be categorized as civil citizens. Joe Biden has been a civil servant for most of his life and we know his story. Sure, there have been moments when we question his judgement or actions, but he’s like that wise uncle with perceptive insight and shrewd actions. The best part is he means what he says.

We are beyond the endless lies and deceptions of Donald Trump as we march into the future with a competent leader. We all wanted to get out of Afghanistan, and Joe made it happen. Yes, the effort was flawed, but there were many issues. It’s time to stop second guessing Afghanistan and move on. Here at home, we must contend with border immigrants and asylum seekers, major court decisions, and keeping our elections safe and accurate. While some scream “Why are we trusting the Taliban?” perhaps they should take a look at Texas where elected officials are denying women’s rights and making it harder for people to vote.

We must stop pouring money into countries that cannot breathe our kind of democracy. And, for sure, why should one more life have to be taken by our flawed world policing and nation building? Let’s just judge the actions of our president and decide if they reflect a true care and concern for America. I think they do.