Let me tell you why

I am a gigantic news junky. You could say I am a crash test dummy for political abuse and distrust. My phone is subscribed to every news flash notification I can find, and when a news story breaks, it vibrates off the table. Perhaps someday I will figure out why I do this to myself, but for now let’s talk about my least favorite subject, Donald Trump and his terrible family.

I have never liked Donald John Trump, without a single doubt. From the combover, to the phony smile, to the poor use of makeup, to the fake existence as a human being, I’m not a fan! Long before he ran for president, he’s been the kind of person who makes America look parsimonious, petty and paltry. Since Trump became President and the aftermath of the dumpster fire where he couldn’t admit he lost an election, I have an unhealthy disregard for the man.

Today, I’ll focus on his clown car of a family, who believes all the riches of the world should be laid upon a silver platter before them. Donald Trump has never felt any empathy for human beings outside of his DNA, but even within his familial circle he picks winners and losers. In the Donald’s mind Tiffany is a loser because she isn’t the phony, silicon-injected princess Ivanka Trump has become at the hands of her fawning father.

I don’t like complainers, and all the Trump men use the tools of ridicule and debasement to argue against those with whom they disagree. As for the women, they come in two boxes. One, the always loyal, former model, trophy wife, Melania. The other poses as intellectually capable, but her lower-octave, vocal fry attempt at sophistication is knee-capped by the worthless babble that drips out of her pie hole — yes, Ivanka. The disrespect of burying the kids’ mom Ivana on a golf course, shows they are despicable bottom feeders, floating turds in the punchbowl.

My main gripe is their constant attempts to convince us things are bad. Their negativity attempts to pull others down with them. Their narcissism shields them from public criticism, yet deep inside they have been groomed to need so much attention and love they are unbearable as people.

I am pissed off that the FBI had to raid his Mar-a-Lago estate and beach club. Why? Because of all the airtime Trump has acquired to bullshit about his warped view of the entire incident. Right after he was elected president, I attended a banquet for my local botanical gardens. I was seated next to lovely lady who was dating a lawyer friend of mine. This woman was not only wealthy, but delightful in every way. While conversing she asked, “What do you think of our new President?” I smiled, “He’s an idiot.” She balked, “No he’s not,” and that changed our relationship. I never mention politics with her and wonder why a highly educated, well-traveled, well to do and articulate person would think Trump was anything other than a silly buffoon of a con man.

I often hear people say, “I like Donald Trump because he tells it like it is.” To that I say, “He’s a liar. He never tells it like it is!” Those who think the opposite don’t read, don’t know or don’t care about the truth at all. I don’t think less of those in his rapture, but I do feel sorry for them. Think about all those Germans who stood by and watched Hitler kill millions of Jews. Yes, the holocaust is worse than an insurrection, but that whole mess in Germany was caused by one person who decided they were above law and order.

Think about all those Republican Representatives and Senators who still believe Trump was a good president. When Trump gets pissed off at anyone in power, he accuses them of dividing the country, this coming from the king of all dividers. Polarity has always existed, but Donald Trump has taken it to an extreme. There’s a guy in my neighborhood with a huge Blue Lives Matter sticker on his car who claims the FBI and DOJ are corrupt and should be defunded. So, if you go to your bank and all your money is gone and there is no FBI or DOJ, who are you going to call? I am sure the answer is not Ghostbusters.

I’ll bottom-line it. I dislike families who think they are better than others. I don’t like the notion of one person being better than another, especially when that specialness is based on fraud, lies and hate. The Trumps abhor anyone who gets in their way. Mothers and fathers, all the way back to the days of the Drumpf’s, have taught they are better than you and me. They are grifters full of boast and deception who don’t deserve most of what they have. Prison for Donald, well, okay if that is what you want, but I would be satisfied if every current member of the Trump family would be banned from running for any public office. Yes, the sins of the father should prevent his offspring from ever being in charge of anything.

But then again, maybe a little prison time will satisfy me, especially the photo op.

We live in what must be the most attention deficient country in the world. One moment, my phone is blowing up with news about the raid on Donald Trump’s broke-dick mansion in Florida, and the next all those alerts are replaced by notifications that Serena Williams plans to retire. Okay, suddenly that has become more important.

I chuckled last night when I heard the news that Mar-a-Lago was under “siege” by members of the FBI, who spent hours at the former President’s residence confiscating what are probably government-owned documents. Of course, I was not at all surprised by the outcries of Republicans and right-wing lunatics. They turned on the Capitol Police and now they’ve turned on the FBI. Why? Because they somehow believe they are perpetrating a political action brought on by the “deep state.” 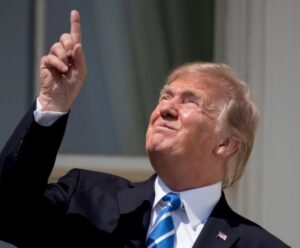 If you are wondering about the reason for the pre-dawn raid I’ll start at the beginning, but full disclosure first. Yes, I am one of those people who never liked the Donald when I lived in New York, hated his TV show and became depressed when he was elected President. I didn’t think Hillary Clinton was special, it’s just that I knew Trump would never take his presidency seriously. Throughout his life he has lied about everything, and I never want a liar to be my president. That is why I wrote and published this book two-hundred days into his first, and hopefully only, term.

First, why did the search take place so early? Well, that’s simply what the FBI does. Their raids and search warrant executions always take place early in the day. Next, why so many agents? Well, the more agents the faster it goes, and the procedure is then less onerous. Then there’s that word “raid.” Make no mistake, it was a true FBI raid and those who oppose use of that word are pedantic losers. The Federal Bureau of Investigation is part of the Department of Justice, and they always operate politely when executing a search warrant, unless they fear violence, death or harm to the public, in which case they break and enter with guns at the ready.

Yes, there was a search warrant, and if the lug-nuts over at Fox “News” would have taken the time to file a freedom of information act request they would have gotten a copy. A credible and respectable news outlet would have researched and revealed why the FBI was executing a search at a former president’s home. The fact that the home is also a private club probably complicated the issue, but still, no one is above the law.

Yes, the raid took place when Trump was away, but there’s nothing conspiratorial about that. Donald was in New York for a deposition by the state’s attorney general concerning possible state and federal tax violations. The FBI and Secret Service coordinated the raid; they both knew when and how it would go down.

Are you wondering what Trump did to deserve a search warrant? Well, the 45th President removed government owned documents from the White House and brought them into his home in violation of  The Presidential Records Act of 1978. The National Archives and Records Administration requested that Trump return all records and he didn’t, so the government had every right retrieve them. Should Donald be convicted of this crime he will never be able to run for Federal office again, no matter how popular he might be with the MAGA-heads. Of course, the jury is still out about the kind of brains in those heads.

I suppose the National Archives told the DOJ that Trump didn’t comply with their request and thus came this very public raid, which could lead to an indictment and arrest. If they find stolen materials in Trump’s possession, and he claims he didn’t know, that won’t fly with a federal judge who would most likely issue an arrest warrant.

Wouldn’t it be ironic if such a petty crime would finally bring down Teflon Don? Here’s this loudmouth, loser and liar of a man busted for shoplifting. It’s not surprising he might get caught up in a technical issue rather than a seriously smoking gun with his fingerprints all over it. He’s the complete idiot I have always known him to be.

Donald J. Trump’s ego and narcissism are so powerful he cannot believe any person or institution has the right to control him. He will continue to claim the 2020 election was rigged because his fragile ego will not allow him to think he lost , and his followers feel the same. Well, get it through your thick heads; he got fewer votes than the other guy. It’s over, and a true political leader would have long ago conceded and moved on. Trump can’t, however, because he’s addicted to the cheers and love he didn’t get as a child.

I, like many Americans, don’t need to see him behind bars, although that would be a righteous outcome in so many ways. I am sure Joe Biden would never pardon him, but the next Republican president probably would. A proper compromise would be banning Donald Trump from ever again running for federal office. I am not willing to allow his mental deficiencies to ruin the country I love.

It’s time for Trump’s sycophants to stop whining about this raid. Sure, have your hearings and confront law enforcement in Congress, but just remember to keep your nose clean, because if you break the law you can expect to be investigated. That is what the term Law and Order means. Got it?