Let’s approach a subject with a clear mind and begin with two simple points. The first is America being an extremely popular place. Then there’s the notion that most problems, especially the difficult ones, are never solved by the most liked idea but only the best idea. As a starting point, let’s decide if we really have a “crisis.”

Let’s examine our record of letting people into our great land. There is an excellent article prepared and posted online by Princeton University you can see here. The report focuses on how changing immigration levels have affected the US economy and employment. Before 1920, immigration was mostly unrestricted and open. Sure, there were rules, and many were turned away, but the overall effort of building a nation was aided by the influx of people taking many of the hard labor jobs worked by slaves before the 1850s. 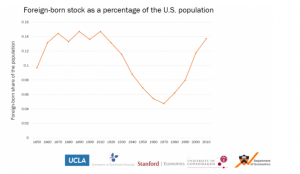 By 1920, the world was in turmoil because of a World War fought in Europe. America became uptight about foreigners and those who didn’t speak our language or look like us. According to the Princeton research, immigration fell from about a million people a year to 150,000. Let’s not forget the Chinese Exclusion Act that was passed by Congress in 1882. It provided an absolute ten-year ban on Chinese laborers wanting to immigrate to the United States and wasn’t rescinded until 1965. Yeah, look it up.

That brings us to the supposed “burden” at our southern border. It used to be mostly Mexicans coming through our “open” border, seeking employment or wanting to join up with family members living in the good old U.S. of A. Keep in mind that Mexicans are truly North Americans. Now, because of political turmoil in Central and South America, many people are making trips from their homelands to ours in search of opportunities and safety.

The latest immigration numbers are amazing, with a claim of six hundred thousand illegal aliens coming into the country last year and new numbers close to two million. Yes, this is a crisis, and it truly shows there is no immigration system at all. It’s a figment of someone’s imagination. I don’t want to go too far off the track, but I’ll insert a short story here.

I once lived in a very fine house in Atlanta, but it had a major problem of rain leaking into my basement every spring. After spending thousands of dollars trying to keep the water out, I finally found an expert who fixed the issue. He said, “Sooner or later water will find its way into your basement, so let it come in.” I looked at him like he was crazy and asked, “Okay, so what then?” He explained that when water comes in the best solution is making a way for it to get out. We dug a trench in the concrete foundation, a sunken river of sorts, which led the water to a drain on the low side of the house. The river was covered by a layer of concrete and we rebuilt the basement with no further flooding. Now what does this have to do with immigration?

There is always a price tag on a solution. I propose we let immigrants in, but we make the cost of entry high enough that we can deter some, while using the new funds to beef up courts, border agents and building a wall where necessary. My idea is each family of four or less would have to cough up $20,000. The large revenue stream could be used to pay for a better immigration program as well as job training, education, housing and the like. We obviously need more workers, not fewer, so it’s a win–win. My plan would also require immigrants to learn English.

What do we do with those who don’t pay the fee and come in anyway? Well, we do what we do now, send them back. We just can’t keep up with the numbers.

Some might react to this proposal as beneath us and our spirit of “Give me your tired, your poor, your huddled masses yearning to breathe free, the wretched refuse of your teeming shore.” Even in the non-restricted period before 1920, a potential US immigrant wouldn’t get in if they failed a basic IQ test. They were also turned away if they were physically unable to work or if they didn’t have a family or friend who would supply lodging.

Some might argue this will promote corruption, but we seem to have corruption in just about everything we do. Just this week some jerks stole millions of meals for school kids during the Covid pandemic. Maybe this wouldn’t happen so often If we had smarter people running our programs. We must also root out the bad guys with guns wanting a life of crime in America.

There is a great line in the conclusion of the Princeton study, “…our research suggests the economic effects of restricting immigration are not so straightforward. While lost immigrant workers can be replaced by new workers (for example through outsourcing), they can also be replaced by new capital (for example through automation), which in turn might also replace U.S.-born workers.” That guy who owns the factory and sees an opportunity to lower his workforce with automation, does as much damage to US workers as immigration. That big boss who pays people in Vietnam to make his products, does more damage to our workers than a few million immigrants. When every business has a sign saying NOW HIRING, we need more workers, not less.

I say let the water in, but channel it to productive use, and make sure those managing the plan understand why people want to come to America. We are still that land of opportunity, but it will be beneficial if we can help those oppressive countries causing immigration influx to become more democratic and stable. But we must be careful and consider the possibility of unintended consequences. Sometimes our “fixing” another country just kills a bunch of people, wastes lots of money and lives and in the end, the place is no better. Just look at Afghanistan and Iraq.

And should you think my idea is crazy, well, we haven’t tried it. it just might work.