Last night, Donald John Trump announced he has filed paperwork with the Federal Election Committee to run for president in 2024. It wasn’t much of a surprise; it was almost as if Trump were trying to beat some mysterious deadline. This will be his third race, and his move might have less to do with running for office and more to do with having a stay-out-of-jail card. He’s being naïve if he genuinely believes that running for president will provide inoculation against indictment. It’s just another lie he perpetrates and believes.

Now before we get into the minutiae of media manipulation and maniacal mental meanderings, let’s take a walk down history lane for a brief lesson in ego and politics.

In 1901, President William McKinley made a trip to the Pan-American Exposition in Buffalo, New York, where the new technology of an X-ray machine was demonstrated. Something horrible happened there. An anarchist shot the 25th president. After eight days in bed with his wounds, McKinley passed away because doctors were unable to remove the bullet. Some thought the new X-ray device could help surgeons seek the slug, but the machine’s inventors warned that a piece of metal exposed to X-rays would have a detrimental effect on the patient, so they did not use it. But wait, the story gets better.

Some corrupt New York politicians and certain other elements of the political machinery hated Teddy Rosevelt, so they pushed him into the VP slot during McKinley’s second run. Well, McKinley won the election but lost horribly in Buffalo, therefore the crooked powerbrokers now had Theodore Rosevelt as the 26th President. They had gambled and lost.

Teddy Roosevelt served out McKinley’s second term (which only lasted one month due to death), but when running for reelection he said that, if elected, he would serve no more than one term. After winning reelection, Roosevelt began to regret his disclaimer. Nonetheless, he remained true to his word, and after completing his first elected term he left the office. Another Republican, William Taft, became president in 1909.

Roosevelt went off to explore the world and years after being away he returned to New York where the city threw him an outrageous welcome and parade. Teddy’s ego was ignited and he decided to challenge his buddy William Taft and run for president again. The fight went all the way to the Republican National Convention, where the egotistical Roosevelt lost the party’s nomination. In anger, Teddy marched out of the hall, got up on a flatbed truck and announced to the adoring press that he was forming a third political party, the Bull Moose Party.

What Teddy did to his own party and to his former friend Taft was unsightly and undignified. With a third party in the 1912 election, Roosevelt and incumbent William Taft each garnered roughly 25 percent of the popular vote. Princeton University President Woodrow Wilson won 42 percent of the vote to become the 28th US President.

Wilson was an unhealthy, bigoted racist human who was also woefully unskilled in world affairs. His lack of attention after World War I and inability to push back during the Treaty of Versailles discussions plunged Germany into financial ruin, which gave birth to the Nazi movement. One might be tempted to blame Teddy Roosevelt for this, but it’s impossible to know what he or Taft would have done at Versailles. 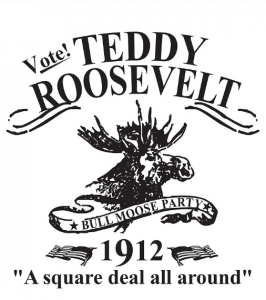 I think it’s safe to say Teddy Roosevelt’s ego was bigger than anything we’ve seen until Donald Trump, who’s now at his Mar-a-Lago resort screeching how he wants to be president again. Curiously, with his declaration that he is running again he’s also admitting that he LOST in 2020. So, I guess the big lie is useful only for raising money, not for legal declarations. But there is a bigger problem here.

If the Republican National Committee is smart, which is a giant stretch, they will rid themselves of the leadership of Ronna Romney McDaniel who is a Trump sycophant and terrible political operative. Just look at the midterm results. As for Florida Senator Rick Scott trying to unseat Mitch McConnell as minority leader in the Senate, well that’s much like appointing the fox to the night security position at the hen house. Rick Scott was the person who talked about eliminating Social Security and pushed the lousy slate of Trump-picked midterm bozo candidates. How in any logical world is this man ready to lead anything? And of course in a secret vote, Scott lost to McConnell who must have lewd pictures of everyone in the Senate.

Now we arrive at the crux of the matter. Let’s say that in about five hundred days a bunch of people run against Trump for the Republican nomination. Sure, we’ll have debates, and the primaries in states like Iowa, New Hampshire, North Carolina and others that might deal Trump a blow “like we’ve never seen before.” Further, let’s speculate they have the “come to Jesus meeting’ and tell Donald he’s not the guy. Oh, Boy!

Should that happen, I’ll lay money on Trump’s narcissistic personality disorder erupting and leading him to form a third party to burn down those who don’t like him. The action of an angry little boy taking his ball and going home will cause death and destruction along the way that will take decades to fix. By making a third-party run, Trump will pave the way for a Democratic win, even it if were Kamala Harris. Mark my words.

Politics is not a predictable concept, as proven by the recent slate of research figures. It’s always a gamble. We have no way of knowing what a given candidate might do as president. In this case, however, Trump is the devil we know, and he’s clearly stated he will get back at anyone in his way, pardon all the January 6th insurrections and, once again, tear away at American democracy.

As the Trump 2024 flags and signs go up, let’s all remember that America hates a loser. If Donald Trump wants to be the Buffalo Bills of politics it’s fine with me, but in the off chance he becomes president again I might be looking for a new place to live. Trump has just caused major problems for the RNC and those who work there. Watch out, kiddos. If you don’t make him president, he will take your ball and go home.