Skip to content
» Cabinet » FROM WATERGATE TO WHITE SUPREMACISTS

Maybe this is supposed to happen every fifty years, just to keep us honest and aware, but the real question is this. What took us so long to become cognizant of the serious things that are happening? During Watergate, many Republicans in the House and Senate stayed loyal to Richard M. Nixon almost to the end. Today, many Republicans would fall on their sword for Donald J. Trump. Why are they so loyal to a criminal?

CNN just aired a four-hour special: “Watergate: Blueprint for a Scandal,” and this well-written and edited story got to most of the important aspects of the Watergate matter and the ensuing downfall of President Nixon. The series was produced and written in part by one of the key figures in the Watergate hearings, John Dean.

The documentary detailed the parallels between Donald Trump’s “Big Lie” and Richard Nixon’s nefarious criminal activities, which surely would have landed him an impeachment conviction and removal from office had he not resigned. After watching the CNN special, I feel Trump’s bold lies about the electoral process are far worse than the things Nixon did. 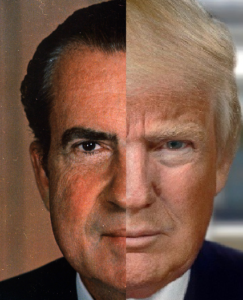 At the time of Watergate, Americans wanted to get at a single truth. The January 6th committee has accurately divulged what Trump’s gang of liars has been producing, things Kellyanne Conway dubbed “alternative facts.” The success of presenting facts in the Watergate matter is far removed from the situation with Trump.

The documentary’s suggestion that all the branches of government operated properly was colored by some flag-waving. Sure, Congress acted responsibly by doing the “checks and balance” thing, and the Judiciary Branch didn’t fall for Nixon’s diversions and attempts to block evidence from being released. After appointing Archibald Cox as special prosecutor, the Department of Justice was thrown into chaos when Nixon fired him. That shot heard round the world, soon known as the Saturday Night Massacre, not only produced resignations and more firings, but drove a crack in Nixon’s claims of innocence. Even though Nixon appointed the final special prosecutor for the case, the revelation of tape recordings made in the Oval Office led to a court battle. When the tapes were released, it became clear what Nixon knew and when he knew it. Arizona Senator Barry Goldwater met with Nixon and explained he would be convicted in Senate impeachment proceedings, and Nixon resigned the next day.

There are more than 50,000 recorded and proven Donald Trump lies. His terrible activities of trying to get the President of Ukraine to find evidence against his rival Joe Biden did lead to impeachment, but as the headline boldly proclaimed: TRUMP ACQUITTED. After Donald’s demand that his far-right followers come to Washington on January 6, 2021 to protest and disrupt the formal certification of the presidential election, he was once again impeached, and once again acquitted. A lingering feeling of some Republicans and most Democrats is someone should be held accountable for the January 6th Insurrection and attack on Capitol Hill.

Now we have live TV hearings by the Committee on January 6th which are vastly different than the Watergate hearings. The committee’s slick, well-organized presentation is disclosing interesting, factual testimony and I’m sure we’ll learn more. The video tapes in these proceedings are much like the audio tapes in the Watergate matter. The gravitas of the proceedings and lack of partisan grandstanding, which usually takes place in Congressional hearings, makes the material seem real and factual.

Kevin McCarthy, the minority leader in the House of Representatives decided he would have nothing to do with the January 6th committee, thereby giving up any power over the proceedings. Two Republicans, Liz Cheney of Wyoming and Adam Kinzinger of Illinois, were selected by Speaker of the House Nancy Pelosi to serve on the committee, meaning no one can say it’s a partisan effort. In fact, Liz Cheney’s role as Vice Chair of the committee is demonstrating that being against Donald Trump’s big lie is a conservative viewpoint.

After he voted against convicting Donald Trump during his second impeachment trial, Mitch McConnell said Trump was responsible for the attack on the capital. However, he felt it wasn’t constitutional or legal to impeach a President once he’s left office. McConnell was essentially saying TRUMP LOST THE ELECTION! Shouldn’t that have been enough to push the rank and of his party back in line with the truth?

Due to the proof of his malfeasance, I believe the House and Senate should take a disqualification vote to prevent Trump from running for any office in the future. Sadly, no one in Congress has the balls or the bravery to suggest such a thing. I would if I was there.

As for the hearings, most of the networks focus on whether or not this parade of evidence will change minds. I suggest changing minds is not relevant. The committee simply needs to get the facts on the record and out to the American public, then maybe we can think about legislation that would give our democracy more protection.

After Watergate, the Presidential Records Act (PRA) of 1978 was passed. If you want to read it, you can grab it here. There is no doubt Donald Trump is guilty of violating this law. He and those who aided and abetted him should be brought to justice. Then there’s this, which deserves our attention: 1725. PROTECTION OF GOVERNMENT PROCESSES — OBSTRUCTION OF PENDING PROCEEDING — 18 U.S.C. 1505. It’s clear that Donald Trump and thousands of his followers broke this law.

Trump attempted to get officials in Georgia to change the results of their election so he would win. We have a recording of the phone call when he made that request and 52 U.S. Code § 20511 declares it is illegal if a person “knowingly and willfully deprives, defrauds, or attempts to deprive or defraud the residents of a State of a fair and impartially conducted election process.”

If a court of law can prove that Trump is guilty of this, the penalties are fines and/or imprisonment for not more than five years. I am sure Donald Trump will love his stay in a Georgia prison, for however long he must stay. Now’s the time for us to start cheering, “LOCK HIM UP.”

One thought on “FROM WATERGATE TO WHITE SUPREMACISTS”