Skip to content
» Cabinet » THEY THINK WE ARE STUPID

The real liars are taking over and must be stopped. The people who hold positions in government offices think they can lie and get away with it. They think the public is stupid and that most don’t remember or don’t even care. Following is a case in point.

During the beginning of Covid in 2020, a researcher and data complier for the State of Florida became a whistleblower when she claimed Ron DeSantis’ administration asked her to fudge the state’s Coronavirus numbers to provide cover while the government did all it could to keep Florida open as fully as possible. Her name is Rebekha Jones.

She was harassed, fired, arrested and her computers were confiscated by the State Police in a raid on her house. The authorities claimed she used her home as a private communication system to send messages to the state’s Medical Examiners warning them of these nefarious activities by elected officials. The judges, all Republican appointees, have refused to drop the case against her for one count of “offenses against users of computers, computer systems, computer networks and electronic devices” for some ill purpose. Okay. 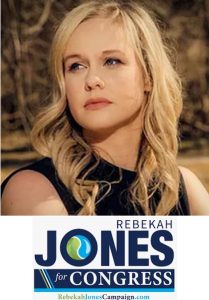 Rebekah D. Jones, the woman in this case, is now running against Matt Gaetz for Congress in Pensacola and it seems her political aspirations are being driven by what she experienced while working for the government. She is a bright person who had no reason to lie about what she was doing, and even after they dismissed her she continued to research and publish a Covid data dashboard as a free public service. Graphic below.

The State Inspector General’s report was released on May 18, 2022, and I didn’t take it seriously. The headline read, “A state investigation into allegations that the Florida Department of Health fudged Covid-19 case numbers to support Gov. Ron DeSantis’ effort to reopen the state after a shutdown in April 2020, has found no evidence of wrongdoing.” Since the Covid-19 crisis hit the state and the US, DeSantis has taken full control of Florida’s Department of Health and was able to move out the person running it so he could appoint a department head who is terribly unqualified for the position, given that he is an anti-mask supporter and vaccine doubter. Yes, DeSantis appointed Dr. Joseph A. Ladapo, MD, PhD to the position of Florida Surgeon General and Secretary of the Florida Department of Health. Google him if you want to see the corruption in his appointment.

Here are some facts. To date, there have been 6.24 million cases of Covid in Florida, with 74,719 deaths. And while those numbers sink in, consider this headline which just arrived, “Florida botched Covid-19 stats in early months.” Yes, Rebekah, your state’s “official” 2020 counted cases and deaths were fudged.

Here’s a story from the Palm Beach Post, “Florida health officials missed thousands of Covid-19 deaths in 2020, had incomplete information for millions of tests and spent millions of taxpayer dollars on testing that lacked vital data, a state report released has found.”

According to the reporting, the investigation found 3,082 Covid deaths the state Health Department did not include in its official counts. Including those victims would have pushed the state’s reported death toll up 18% higher.

On top of it, Florida investigators “found no evidence” related to the email incident that officials said had triggered the raid at Ms. Jones residence. They had alleged that a chat message was sent to a planning group on an emergency alert platform, urging people to speak out publicly about Florida’s coronavirus strategies. Wow, thinned skinned DeSantis is now confirmed.

A majority of Florida’s 5.5 million-plus Covid test results — 51.5% — lacked information about the race of those tested. About 59% lacked ethnicity information. Hispanic people compose the largest slice of Florida’s population. Boy, that sounds a bit racist, doesn’t it?

By mid-May 2020, 25% of Hispanics and 20% of Blacks tested positive for the virus, compared with about 11% of whites. The Palm Beach Post discovered this after examining nearly 200,000 test results in which individuals reported their race or ethnicity. The Health Department never released those test statistics. Only 38% of a sample of 2,600 tests conducted by three unnamed state-contracted labs returned results.

The reporter who authored the article for the West Palm Post, Christopher Persaud, reached out to me with a succinct but fact-filled review of the whole Rebekha Jones matter: “The State Auditor examined Health Department data. The Health Department internally examined Rebekah Jones’s claims. The state Inspector General is examining Jones’s claim she was wrongfully fired. The State Department of Law Enforcement has charged Jones with hacking a state communications channel. They’re still investigating. I don’t think the case has gone to trial yet. So, the charges remain.” The fact is that the Sunshine State is not very transparent, and it’s challenging to just get statements from the people in power.

I draw a simple conclusion from all this. Florida’s Governor will lie about anything to make himself look good, and worse, will use his power against anyone who disagrees with him. He spent more energy on fighting Rebekah D. Jones than conquering Covid. If anything, his policies based on his uninformed opinions and advice from unqualified people actually killed people. It’s bad enough the pollution in Florida water is killing fish, but the wannabe king in Tallahassee is killing people.

One thought on “THEY THINK WE ARE STUPID”