None Dare Call It Treason

If you have been following the insanity of our government during the last six months, you surely realize two things. One, the rules in both the House of Representatives and Senate stifle progress. The current filibuster is being used to block deeply partisan bills. The majority party, currently the Democrats, could change or eliminate that canon but they don’t because they want to be able to use it when they become the minority. Two, any Senator can amass major power by using procedures to block their own party’s agenda. Is there anything good about that?

Joe Manchin has been acting the part of disrupter with a polite smile and soft shoe dances with reporters and party members. He has decided he must like the Build Back Better bill 100% before he will give his blessings. There is no compromise with Senator Manchin from West Virginia, and perhaps that’s true because he has a long-term plan, or someone else has a long-term goal for him. Someone wants Manchin to become our president.

Take this for what it’s worth, Joe Manchin is rich. Some say he is a five-million-dollar man. His campaign chest is full of gold and most of it comes from Big Coal, Big Oil and, specifically, Koch Industries. Joe’s state once made lots of money on fossil fuels but now, between the declining job market and a horrible opioid crisis, West Virginia has become depressed. Manchin might want to create the illusion that he’s more Republican than Democrat, but there are some major flaws in his strategy.

West Virginians would benefit greatly by the Build Back Better bill because it’s money and programs would solve many of their problems. Manchin talks about curbing inflation, which is a nice gesture, but the people in his state need the money and services now. I suspect his rap about inflation is for his donors not his constituents. Manchin keeps asking for less in the bill not because he’s being consistent, but because it keeps him on TV. Had he stayed with the number he presented in the beginning his routine would seem genuine, but his waffling is sabotaging a plan for things most Americans desperately need.

Manchin seems tone-deaf when holding up a domestic budget plan with talk about saving money for future needs like the Russian military buildup in Ukraine or China’s actions in the South China Sea. It’s almost like he’s being led by some dark Republican force to make Joe Biden look bad or weak.

Could it be that Joe Manchin has been convinced by Charles, the remaining Koch brother, that if he plays the game right Koch Industries will help him become president? A moderate who supports legacy energy sources would be perfect for a company that spends money to buy candidates and keep them loyal. They lean on their minions in Congress to stop anything they don’t like and they have the power to pass legislation that benefits their oil and chemical businesses. If you were looking for a “deep-state,” look no further than Koch bucks.

Joe Manchin showed his hand last week when he came out against the offshore drilling ban that Biden wants to put in place. Just think about this, West Virginia has no shores so how could that position help his state? It’s not for his home state, it’s for his bestie benefactors at Koch Industries.

I think Joe Manchin would be a bad president because he lacks the ability, will and moral core to be trusted. Oh, I don’t think he would sell secrets to the Russians, or Chinese, but I don’t think he’s for the people, He’s for Joe Manchin.

When Manchin blatantly came out against increasing the federal minimum wage, I wondered how can a guy who says he’s for making things better for the middle-class fight against them like that? I am no longer sold on his good old boy routine. He’s just another grifter politician who cares more about reelection than moving us forward as a nation.

If I was Joe Biden, I would call Manchin and tell him to stop with this shit, and maybe that’s what he did by issuing that scathing White House statement on Sunday. What that statement revealed, is that Joe from West Virginia is double dealing. “If his comments on FOX and written statement indicate an end to that effort, they represent a sudden and inexplicable reversal in his position, and a breach of his commitments to the President and the Senator’s colleagues in the House and Senate.” And they added some salt to the wound that Manchin has inflicted on his own party with, “Just as Senator Manchin reversed his position on Build Back Better this morning, we will continue to press him to see if he will reverse his position yet again, to honor his prior commitments and be true to his word.” What they are saying is that Joe says one thing to placate Biden, and another to get Fox News viewers root against Biden. There’s something very smelly about Joe Manchin. 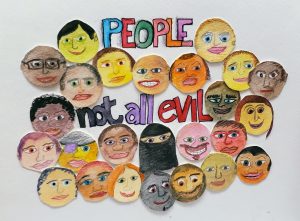 We knew that the great divide in America would have a major effect on the presidential election in the year 2020, but something else was lurking that we didn’t anticipate. The world suffered a global pandemic of Covid-19, and everything changed. The lockdown motivated one author to write MASHED POTATOES: Covid, Cancer & Comfort Food. The cover ironically claims the book is a “humorous” recollection of 2020, but one might ask, “Where was the humor?” This is a work of survival to motivate those who desire to get beyond Covid-19, beat cancer and defend our precious Democracy.  Get it here.