Skip to content
» Cabinet » WE CAN’T BRING THEM BACK

The maddening truth about school shootings

I’m certainly tired of talking about it but I will continue to state my case with all the certitude of a truthteller. We are all crazy and will continue to be crazy until “we the people” do something together, but it’s not going to be easy. As John F. Kennedy said, “(We) do the other things, not because they are easy, but because they are hard, because that goal will serve to organize and measure the best of our energies and skills, because that challenge is one that we are willing to accept, one we are unwilling to postpone…”

We have been postponing action against the curse of gun violence and school shootings for years. Some say that we just aren’t smart enough to find a solution. Others declare that the constitution is utterly sacred and we must stand behind the Second Amendment, even if it comes with the cost of our own kids getting killed. Still others exclaim that now is not the time to confront the problem. Really? We’re mourning the loss of more young lives, and this is not the time?

We might have a goal, but we are scattered. The other side is organized with money and power. We have no way to measure our energies because we haven’t done anything. We have nothing to show.

The breaking news bulletin hits and I look down at my phone to ask, “Was this that one or is this a new one?” CNN reports that in 2019, there were 45 school shootings in 46 weeks. The EducationWeek website states, “There have been 29 school shootings this year, 21 since August 1, 2021. A shooting on Nov. 30, in which a student killed four people and injured seven at an Oxford, Michigan high school, is the deadliest school shooting since May 2018. There have been 87 school shootings since 2018.” So, my friend, it’s not a hoax; America has a systemic problem. A murderous virus has infected our school systems and the bloodstream of education.

I watched a TV talking head say that authorities are thinking about charging the parents of Ethan Crumbley, the kid who killed in Oxford. Okay, yeah, let’s pour on some parental guilt, and while we’re at it let’s string up the gun salesperson and then heave lawsuits at the weapon manufacturer until they’re bankrupt. Don’t you see those are all stupid, unworkable ideas? We didn’t arrest the painkiller companies that created hundreds of thousands of addicts and, yes, that took the lives of some schoolkids. The CDC says that from 1999 to 2019, nearly 500,000 people died from an overdose involving opioids, including both prescription and illicit medications. Who was arrested, charged, tried, convicted and sent to prison for life? No one, not a soul.

Here’s my question. How did a fifteen-year-old kid in Michigan get an automatic weapon? The surfacing facts reveal the same pattern we’ve seen before. According to the Daily Beast, “Ethan Crumbley, a sophomore, was previously flagged by administrators for ‘behavior in the classroom that they felt was concerning,’ Oakland County Sheriff Mike Bouchard said Wednesday. He was called in to talk with school officials on Monday and Tuesday. Then, his parents were brought into the school the morning of the shooting for a face-to-face meeting about their son’s behavior. Sheriff Bouchard wouldn’t say what the behavior was, and police weren’t informed about any potential issues prior to the tragic event.”

There you have it. They knew something could happen but did nothing to protect the other students. I always ask about metal detectors. Do schools have metal detectors? Should schools have metal detectors? Experts say that they don’t work. Okay, but we use them in many places, but the real problem, each door would have to have a detector and each security clearance area would need an armed guard. And educators think they would make students feel like they are in prison. Really? So, I guess being in prison is safer than going to school?

It’s been more than six years since terrorists shot up a movie theater in Paris, and more than 17 years since a mentally unbalanced fan obsessed with heavy metal music shot and killed former Pantera guitarist “Dimebag” Darrell Abbott and three other people during a show in Columbus, Ohio. Most sporting events and music concerts deploy full body searches and/or metal detectors to keep the high-priced talent safe. Why we cannot do this in our schools is baffling beyond belief. Here’s an idea, let’s put a mega-tax on every weapon and box of ammunition that goes into federal funding for security at schools?

While anti-gun activists focus on registration laws, which are farcical at best, everyone must understand that damage and death will ensue when a hormone enraged teenager gets his or her hands on a gun and ammo. America has laws that disallow teenagers to drink alcohol and smoke cigarettes because we know their immature brains often make bad choices. Texting while driving kills people but many kids do it, just like their parents. When it comes to kids and guns, isn’t it time we force their immediate role models to take some responsibility for what their metal has wrought?

I support freedom, rights and all the other things the Constitution says we must protect, but nowhere does it say that a kid has the right to carry a lethal weapon. Obviously, Ethan Crumbley’s parents did not lock up the newly purchased weapon. Did the father teach young Ethan how to shoot the gun? Why was there so much ammunition in the home? I have a feeling we will eventually learn that many things that were thought of as ”insignificant” were totally ignored. It’s sad that Ethan’s parents didn’t see he was a troubled child with revenge in his heart. 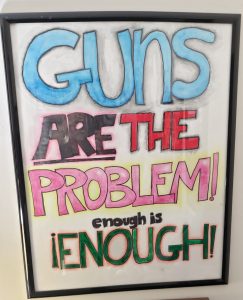 I keep a sign in my office that I used during a protest in Florida after the Stoneman Douglas High School shooting. As you can see, it didn’t work and no one in America will ever ban guns.

One problem is mental health, but the reality of death is determined by a device. We either decide to control possession of that device or we’ll lose more and more freedoms, until we’re all carrying guns and searched everywhere we go. As I am going through my obligatory American grief right now, my mind is trying to render meaning out of this most recent tragedy.

The truth is we all are to blame. Perhaps one day we’ll have had enough to ask the one question I ask myself every day, what are we waiting for?

We knew that the great divide in America would have a major effect on the presidential election in the year 2020, but something else was lurking that we didn’t anticipate. The world suffered a global pandemic of Covid-19, and everything changed. The lockdown motivated one author to write MASHED POTATOES: Covid, Cancer & Comfort Food. The cover ironically claims the book is a “humorous” recollection of 2020, but one might ask, “Where was the humor?” This is a work of survival to motivate those who desire to get beyond Covid-19, beat cancer and defend our precious Democracy.  Get it here.