My local newspaper ran an editorial the other day about Atlanta Braves’ fans using an old native American chant while making a motion of chopping. They said it was time to stop this offensive form of cheering.

I lived in Atlanta for more than twenty years and raised four kids as Braves fans. The article mentioned recent team name changes, like the Cleveland Indians baseball team becoming the Guardians and the Washington Redskins transforming into the Washington Football Team. The new Cleveland team name is derived from statues on a bridge and the D.C. NFL franchise revamp is the result of a total lack of creative thought. 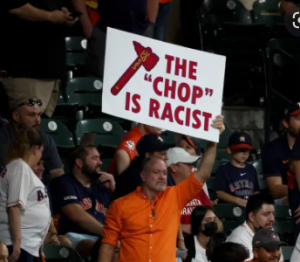 American sports have continuously progressed and changed over the years for many reasons. In the early days of collegiate football, for example, helmets were not required and 19 players died from head injuries in 1905. The Chicago Tribune referred to that statistic as a “death harvest.” In that same year, the ranks of college players included 137 serious injuries, so, the National Collegiate Athletic Association was created to lay down some rules and policies intended to kill fewer players.

Over the years, teams on the college and professional levels have had some terrible names. The Baltimore NBA team was once named the Baltimore Bullets, which didn’t mesh well with inner city crime statistics. They became the Wizards when they moved to Washington. The first MLB team in Houston was the Colt 45s, named after the gun, not the beer. They are now the Astros, named after… a dome, I guess.

I still laugh when cheerleaders for South Carolina scream “GO COCKS!” on the sideline of their team, the Gamecocks. The Cincinnati Reds were once the Red Stockings because they wore red socks but wanting to avoid confusion with the Boston Red Sox they took on a new name, the Reds. In 1953, when the term “Reds” became associated with communism, the ownership changed the team’s name to the “Redlegs.” In 1959, the team returned to the name Reds once people realized that RED was a color and not a diabolical anti-American force.

For those not familiar with baseball history, the Braves started out in Boston under many names including the Beaneaters, Doves, Red Caps and even Red Stockings, but the team eventually settled on the Braves, first used in 1912 and then revived in 1941. It originates from the term for a Native American warrior. Over time, from Boston to their 12 years in Milwaukee, the team used a Native American theme in their logos and marketing.

During the 1991 season, the Atlanta Braves rose from being the worst team in baseball and ended the season playing the Minnesota Twins in the World Series. Although they didn’t win, something happened that year that electrified their fans. A woman who was a big fan of the Florida State University football team, the Seminoles (another Native reference) brought a foam tomahawk to the Braves game in Atlanta and began air-chopping and chanting to rooting for her team. Her actions were caught on TV and within days fans were mimicking her. The Atlanta Braves quickly exploited the opportunity by handing out hundreds of thousands of foam tomahawks at their games. The eerie chant and the chopping incited Native American protest groups, who were kept “safe” in a corral outside the old Fulton County stadium. I am not kidding.

Current Baseball Commissioner Rob Manfred said he talked with the Cherokee tribes in that area this year and claimed they said they didn’t mind the gestures and singing, but where’s the research? I doubt the whole tribe likes the chant.

Deep-seated racial guilt may be at play when this kind of team spirit annoys white people. If hardcore fans were to admit these appropriations are wrong, they would be echoing and validating the BLM movement and Critical Race Theory. Scratching that itch might be too far a reach for those with a “we don’t care” conservative political bent.

Braves fans believe the chop and chant helps their team win, just like shortstop Dansby Swanson proclaimed on live TV that his savior helped him through the rough times of the season. Just about everyone has a talisman or superstition. The cheers of a baseball tribe are just another example of a belief system, whose actions might be “wrong” at times but can unify the flock. In the Braves’ case, the gathering of believers pay hundreds of dollars to watch, chant, cheer and chop. They don’t comprehend the offense.

There are religious beliefs and customs that offend me, but I’m not about to curtail someone else’s creed. It’s a different story when actions hurt people. Maybe Florida State, the Kansas City Chiefs and the Atlanta Braves need to sign a peace treaty with their fans. Wow, I cannot believe that just flew out of my mouth. Things change when an institution signs a treaty and what was once agreed upon can disappear. Some get miffed saying they didn’t agree to the change and they never owned slaves so why should they pay.

Here’s another revelation of baseball history. The original minor league baseball team that played for decades in Atlanta was named the Atlanta Crackers, and the Atlanta Negro League team was the Black Crackers. Yes, those were the names! The color barrier in professional baseball and other American sports took more than 70 years to end. A bizarre racist aspect of American life was Freemen could not play the sport they loved. It was something every Black parent had to explain to their kids.

Many professional sports players were of Native American origin, from Jim Thorpe to Johnny Bench, who played for the aforementioned Cincinnati Reds. You can learn about them here. They had to fight to get into pro sports, as did African Americans. That is why we began calling them baseball “clubs,” but that doesn’t fix those with offensive imagery.

Times have changed. The ”N-word” was often used by players in the beginning of baseball before 1947. Major star Ty Cobb known as the “Georgia Peach” once said he’d quit if N****** were allowed to play. This is the same player who used to sharpen his spikes to hurt players he slid into, the white ones.

Racism was rampant in America in those days and so it was in baseball. We do progress each year and have fewer and fewer things to shame us, but I might remind you that the USA Women’s Soccer team had to sue to get equal pay. Has that happened yet? 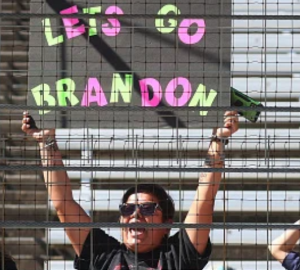 The word “cracker” referred to poor whites, particularly those inhabiting the frontier regions, and it is suspected the term it was a shortened version of “whip-cracker!” Does that mean that a Black Cracker would be holding a whip? I am sure no one in Atlanta dwelled on this from 1884 to 1965, when the Black Crackers field was torn down and replaced by a Sears & Roebuck. Maybe back then, it was a joke, about poor white guys playing baseball. But today, the joke’s on them now because they are taking major heat on the chop and the chant. It may take fans a long time to stop that, but at some time we must ask why we can’t find inoffensive ways of cheering.

Why am I offended when someone yells, “LET’S GO BRANDON?” Oh, yeah, because it really means “Fuck Joe Biden.” Time for some whip crackin’!

One thought on “THE MYTHOLOGY OF SPORTS”