Don’t we all have it?

I’m not sure exactly why, but I have never liked Steve Bannon. He’s a purveyor of false statements and conspiracy theories, plus he holds disdain for any institution with which he disagrees, including the American judicial system. Stephen K. Bannon was not only the architect of Donald Trump’s 2016 presidential election campaign, but for some time became a trusted advisor to the 45th President in the White House. Bannon, along with two other guys, also ran a private fund-raising effort named “We Build the Wall,” to bolster the president’s signature initiative along the Mexican border. Those three guys were dipping their grimy hands into the money pot and taking funds. Ironically, the small section of the wall that they built was washed away during a storm.

Trump pardoned Bannon in the waning hours of his presidency. This was highly unusual because the prosecution’s work was in the preliminary stages, and it was clear that a trial was months away. The pardon was a favor — a quid pro quo intended to keep Bannon from ever testifying against Trump. That bubble is perhaps about to burst because Bannon’s possible role in the January 6th insurrection occurred before his pardon, which contained no mention of the Capitol Hill riot. Not only can Bannon be called to testify, but if he played any wrongdoing in that matter the pardon would not protect him. By the way, if you want to see all the people Donald Trump pardoned you can go here.

Bannon was subpoenaed to come before the January 6th Special Committee and testify. Both he and the records that also were part of the subpoena did not show up at Congress last week. Now, the committee will present the matter to the entire House of Representatives for a vote on Contempt of Congress. What is that you ask? Contempt occurs when an individual intentionally interferes with congressional action. Congress has the power to restrain such individuals by declaring them in contempt of Congress, which is similar to contempt of court.

Congress’ ability to impose a contempt charge against an individual interfering with its duties is considered an implied power of the legislature. Experts believe that one who withholds information or testimony can be judged in contempt and held for a period between one day and a year. Although our Constitution does not explicitly provide for Congressional power to hold individuals in contempt, such power is considered implied because Congress could not effectively perform its duties without it. So, where will this Bannon situation go?

Remember that even if Steve Bannon appeared before Congress, he could invoke the Fifth Amendment and refuse to answer any question on the grounds it might incriminate him. Under law, no American can be forced to testify. Past Congressional committees have used the court system to incarcerate people. In 2005, a federal judge sent New York Times reporter Judith Miller to jail for 85 days for refusing to divulge her confidential source to a grand jury investigating the disclosure of a CIA agent’s identity. She finally testified. Why wouldn’t Steve Bannon be put in jail for not talking about what caused the insurrection at the Capitol on January 6th, 2020? 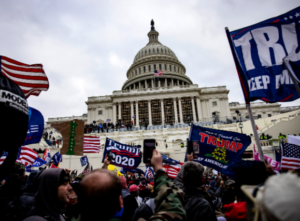 Here’s some insightful background on Steve Bannon. He was an officer in the United States Navy for seven years in the late 1970s and early 1980s. Some believe that Bannon harbored a distaste for military command and disagreed with not only the way the Navy was run but also how we fought wars.

After his military service, Bannon worked as an investment banker at Goldman Sachs for two years. Some say he made tons of money there. In 1993, he became acting director of the research project Biosphere 2, and he was also an executive producer in Hollywood. He produced eighteen films between 1991 and 2016, and he was an investor in the production company that funded the TV show Seinfeld. In 2007, he co-founded Breitbart News, a far-right website he described as “the platform for the alt-right.” He saw the Trump bandwagon as a way to effect change of the highest order upon the United States, but his outspokenness got him in trouble with Trump. The Donald so disliked Bannon’s candor that he diminished his status, but never his influence, within Trumpworld.

Many of Trump’s most radical policies and speech patterns came from two people in the Trump White House, Steven Miller and Steve Bannon. When Trump said, “There were good people on both sides,” he was probably repeating something Bannon had said to him. Bannon believes that all problems in the United States government are fundamentally the result of bureaucrats and elected officials running amuck. He openly declared war on what he called the “administrative state.” This was not a novel or new idea.

Most self-appointed experts believe the administrative state’s weaknesses are 1) Nondelegation, interference from above on those executing policies, 2) Judicial deference, believing the courts should be allowed to judge and rule without review or oversight, 3) Executive control of agencies to the point where a president, governor or other official believes they have the right to hire and fire those at any level of government, 4) Procedural rights, due process given to people who do things wrong, even if those things are really bad, and 5) Agency dynamics, where a head of a commission, committee or local agency is given the ability to  enforce regulatory compliance and adjudicate disputes.

I agree that all of that seems confusing and in conflict with itself. It’s like the guy at a homeowner’s association meeting complaining about the board making all the decisions. The president could stop the proceedings to lecture how representative government works, but that would waste time. Logic dictates that one cannot complain about an institutional structure and demand majority rule on every issue, because the majority’s position may not agree with that of the complainer. On the other hand, giving greater authority to one person and demanding micromanagement on every issue could deter productivity.

In general terms I don’t think Steve Bannon knows what he’s talking about, but I do believe he knows a lot of about what happened on January 6th. He should be locked up if he refuses to testify and comply with the Congressional subpoena. He beat the fraud charge because Trump pardoned him, but if he thinks he’s got a shot at destroying democracy over some illusion of self-worth and misinterpretation of Karl Marx and Friedrich Engels, I say, “Fuck him and the big orange horse he rode in on.” If that disheveled man had anything to do with the insurrection he should be put in jail. Period. Yes, you might say I have contempt for Stephen K. Bannon.

One thought on “CONTEMPT OF CONGRESS”