I became aware of differences between religions way back in elementary school. Some students didn’t come to class on certain days of the year, and that was the first time I heard the expression “religious holiday.” As a kid, it was only natural for me to ask how I could get one of those. I eventually learned that several groups of people avoided certain foods. The Jewish kids didn’t eat the ham sloppy joes and the Catholics ate fish on Fridays. Cheese sandwiches on any day were okay for both. It’s a tribute to our teachers that these background differences never boiled over into an “us and them” mentality.

Now we see some people waving religious exemption flags to refuse the normal order of things, but beyond what a girl might wear in gym class (Muslims) to what a boy can learn in sex education class (mostly in public schools) religions stay out of matters of state. A person might say it’s against their religion to drive on the right side of the road, but that would be indefensible.

No major religious denomination in the US opposes vaccination outright, but an individual’s “sincerely held” religious belief does not have to be part of an organized religion’s mandate to be considered a valid reason for vaccine exemption. Here is a simple test. If my God says I am not allowed to do this or that, then I can ask for a religious exemption. Conversation between a parent, a child and their God is not to be filtered or interrupted by the school board.

Medical exemptions are pretty cut and dry. Your doctor can write a note to the school saying Tommy’s condition, whatever it is, should not be challenged by a Covid-19 vaccine and the kid would not have to get a shot. However, some states have taken a stand on this issue. For example, families lined up outside a chiropractor’s office in Venice, Florida to obtain medical exemptions for the school mask mandate. Once that scam was uncovered, the school district refused those bogus exemptions.

Many states are moving quickly to thwart overzealous parents and pandemic-denying employees. Connecticut refuses any religious exemption from vaccine requirements for children in grade 12 or below.

In Colorado, a person seeking a nonmedical vaccine exemption due to either a religious or personal belief must first complete an online educational module about vaccinations.  That’s right on the line.

Arkansas requires their public and private schools to report the numbers and percentage of students who have vaccine exemptions. 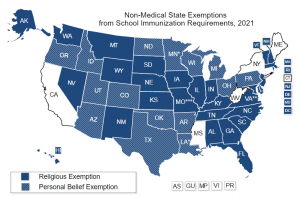 The First Amendment to the United States Constitution can be interpreted in several ways. The first part says, “Congress shall make no law respecting an establishment of religion, or prohibiting the free exercise thereof; …” That’s pretty clear. The federal government cannot establish a religion nor can they stipulate if or how you worship or practice a religion. Many claim that the next part of the amendment about freedom of speech enhances the religious proposition, but the semicolon after the religious decree indicates separation of the two main clauses. It  denotes a more pronounced division than a comma would indicate. Sure, religious freedom is a form of freedom of speech, but let’s not forget that cliché about screaming “FIRE” in a crowded church, which is not such a freedom.

The government cannot demand you to justify your belief that God doesn’t want you to get a Covid-19 vaccination that could save your life and the lives of those around you, but then many of the people claiming a religious exemption couldn’t articulate exactly which part of their dogma dictates they reject a deed needed for the common good. Some folks point to the Church of Christian Science as an example of a religion intolerant of vaccines, but if those birdbrains did a little research they would see that even this religion, which is typically wary of medicine, has a positive view on vaccinations. Oh, you don’t believe me? Well, read it here.

If you don’t want to get a shot because you think it’s in conflict with the Old Testament, you might want to send your wife into the forest during menstruation or ship a married woman who has been unfaithful, along with her “other man,” to the community pool and stone them to death — I mean with real rocks.

If you have an overzealous “fire and brimstone” preacher who claims the government is out to destroy God, Jesus and every living Republican, consider these headlines: “COVID-19 death toll 7 among Fla. church members; pastor blames vaccine misinformation“ or “Unvaccinated Pastor Who Almost Died of COVID Now Preaches The Importance Of Vaccines“ and, of course, “Vaccines are a ‘personal decision,’ Hillsong Church founder says after congregant refuses shot and dies of COVID-19.” None of these are made up. Each headline is real.

It’s all on you if you claim religious exemption for a Covid shot that becomes a one-way ticket to meet your maker, but if your false religious exemption to avoid a little prick in the arm ends up killing your grandparents or kids, I hope after you confess to your preacher you can return to living a full and productive life.

Jesus was a great man and Mohammed was a noble unifier and prophet. Both knew the miracle of healing. Do you?

There is a subliminal part of art that makes one wonder what the artist is trying to say. Some of my drawings and doodles mean absolutely nothing. They were just images of daydreams that I splattered onto paper. Others have a specific memory, joy pain or frustration. Some hold love, sexual passions or merely thoughts …