There is a passage in my 2014 book If God Could Talk where a TV talk show host and his producer are vetting God for an appearance on a cable TV show. The interview became a difficult discussion with God about abortion. After the female producer challenged God about the government attempting to control what a woman does with her own body, God fired back.

“You can’t have things both ways. You cannot say you believe in evolution, but refuse to let nature take its course. You have no idea if that fetus will be your next Messiah or your next serial killer. You use evolution as your science and then use a myopic viewpoint to legislate when life begins. What you cannot comprehend you blame on God or wave your Constitution in the other person’s face.  You want to play God? Go ahead, play God and kill the baby.”

Now one might ask, was God really talking in the book or was the author personifying the deity by scripting his lines. Stop right there. I wrote the lines and God had nothing to do with it. I was trying to make my person-God-character believable. One might want to say that God is definitely pro-life, but is he really?

On July 22nd, the state of Mississippi filed a brief with the Supreme Court defending the state’s ban on abortion after 15 weeks of pregnancy and requesting that Roe v. Wade be overturned. Their case was already set to be the Court’s biggest reproductive rights lawsuit, but because they went all in, it definitely demands our attention.

“The national fever on abortion can break only when this Court returns abortion policy to the states,” said Mississippi Attorney General Lynn Fitch. By the way, it’s Ms. Fitch. Lynn is a woman. This might seem like a hail Mary pass but conservative pro-life people have been working on this since Roe v. Wade was decided in 1973. Let the fun begin.

A primary goal of the Republican Court-packing has been a not-so-subtle plot to please their most conservative voters who want Roe v. Wade to be overturned. They want to abort the law and flush it down the river. I debated this issue in a 1967 high school class where I was assigned the task of defending anti-abortion laws, and it’s almost unbelievable that the debate continues to this very day.

The 1973 Supreme Court ruling was rather simple. It stipulated that the Constitution of the United States protects a pregnant woman’s liberty to choose to have an abortion without excessive government restriction. The law didn’t address the rights of the unborn fetus because it was not a fully grown human. So, the debate begins and ends on the determination of when life actually begins and who makes that decision.

Most people don’t realize that Roe is not the name of a person. We have traditionally used names like John Doe or Jane Roe to mask the identity of citizens in highly sensitive matters of law. At the beginning of the case, the Court addressed the legal issues of standing and mootness. They decided the appeal of Jane Roe, whose actual name was Norma McCorvey, was moot because she had already given birth to her child and thus would not be affected by the ruling. The Court also decided she lacked standing to assert the rights of other pregnant women. Finally, the Court understood that they couldn’t restore the rights of a woman in the past but could hear a case about all women in the future and whether the Texas law banning all abortions was constitutional.

Many constitutional law experts believe Roe v. Wade was not decided properly and they focus on this part of the ruling, “We need not resolve the difficult question of when life begins. When those trained in the respective disciplines of medicine, philosophy, and theology are unable to arrive at any consensus, the judiciary, in this point in the development of man’s knowledge, is not in a position to speculate as to the answer.”

Medical science and care 48 years ago was not nearly as advanced as today’s modern technology. Hospitals and doctors are now well equipped to save premature lives every day. In the summer of 2020, Minnesota’s Beth and Rick Hutchinson had what they call their miracle baby boy. Their son Richard was born at 21 weeks, one of the youngest babies to survive such an early arrival.

That being said, we must put the facts on the table. In general, an infant is not considered to be viable until after 24 weeks gestation. The survival rate of an infant born before they are 24 weeks old is less than 50 percent.

Texas Governor Greg Abbott recently signed new legislation into state law that bans abortion at the onset of a fetal heartbeat, which can occur as early as six weeks into a pregnancy. The Supreme Court refused to determine and decree when life begins, yet the Texas lawmakers, predominately composed of men, have decided a woman cannot have an abortion for any reason after six weeks. Do the Texas legislature’s paygrades allow them to play God? Many women don’t know they are pregnant six or even more weeks after conception.

Overturning Roe v. Wade will hurt poor women, their family planning and their futures. I hate to drop a bomb here, but many American women get abortions not because of rape, possible inherited fetal impairments or health conditions of the mother or baby. They get abortions just because they are not ready for another baby. We will end up with millions of unwanted babies, an overwhelmed adoption system and no safety net for single women.

Unskilled, untrained people will perform unsafe abortions and kill a bunch of women due to a lack of sanitation or expertise. It has happened in the past and will happen again. To make matters even worse, we now have the internet with its preponderance of old wives’ tales and faulty advice ready to hand out abortion routines that will kill or harm fetuses and mothers. Remember when someone suggested people drink bleach to kill Covid-19? Who came up with that idea?

They say we must send our sons and daughters to war to save the life of democracy and our nation. When our kids get killed, we honor them, but we still have some blood on our hands. We let people drive drunk, they kill other people and we put up little crosses and flowers on the sides of our roads. And when we block the funding of family planning organizations and ban the use of federal funds for abortions, we are simply saying that we don’t care about the poor and under-educated women in America.

We will surely hear from abortion opponents with mega certitude that the medical procedure of abortion violates “God’s Word.” It might come as a surprise that neither the Old Testament nor the New Testament mentions abortion — not one word. There are some biblical cruel rules about menstruation, but most modern Christian women dismiss the advice.

Women are different than men but they aren’t any less equal. If the government tells a woman what she can do with her pregnancy, what might be next? Could we see new laws for demanding the castration of rapists? Might the government enforce tubal ligation of women with “too many” children? China does that. Maybe new rules will ban “certain women” from making babies who might become violent criminals? Where does it stop? I cannot believe that the right of millions of women are in the hands of our legal system. Who wrote this script?

CARTOON OF THE DAY 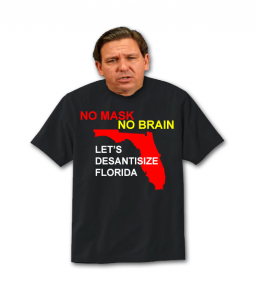