Skip to content
» Cabinet » WHICH PILL WILL YOU TAKE?

The Lessons of Fantasy and Inner Conflict

For today’s post, I kindly ask that you suspend reality and think not only outside the box but beyond this world and the next. Place yourself far away in another galaxy, where reality is less discernible and evident. I was recently draw back to the movie The Matrix when it was mentioned in the book Caste by Isabel Wilkerson. I dusted off the DVD and watched it again.

So far, The Matrix is a trilogy, but The Matrix 4 is slated for release on December 22nd of this year. The richest and most well-designed scene is in the first movie of the series, which nicely lays out the premise. Laurence Fishburne plays the role of Morpheus, who wears strange sunglasses without temples that are affixed to his nose by only the bridge. An incredibly young Keanu Reeves plays the part of Neo, a brilliant hacker and computer programmer.

In the scene, Morpheus tries to explain the Matrix to Neo, using terms and poetry that might lead you to believe he’s talking about a divinity or God spirit. He warns Neo that, “It is the world that has been pulled over your eyes to blind you from the truth.” Neo wants to understand the Matrix and believes Morpheus has the answer he desires. It’s the classic tale of a young man seeking universal truth.

The ever-curious Neo asks, “What truth?” and Morpheus explains, “…you are a slave, Neo. Like everyone else, you were born into bondage, kept inside a prison that you cannot smell, taste, or touch. A prison for your mind.” The older Morpheus explains that the truth, and thus the Matrix itself, is something he cannot talk about, others must see it for themselves. With that, he opens his hands and shows Neo two pills — in his right hand a red pill and in the left a blue one.

Now one could start there with an analogy of red representing right-leaning or conservative viewpoints and blue signifying left leaning or liberal thinking, but that would be too easy. As we learn, nothing about the Matrix is easy.

Morpheus lays out the conundrum by saying, “This is your last chance. After this, there is no going back. You take the blue pill and the story ends. You wake in your bed, and you believe whatever you want to believe.” I have always thought that this choice thing was a setup, a trick, because it didn’t matter which pill Neo took. He would always be in search of the truth because that is the way he is wired.

Morpheus then explains the other choice, “You take the red pill, and you stay in Wonderland and I show you how deep the rabbit-hole goes. Remember that all I am offering is the truth. Nothing more.” This is where is gets good. Neo takes the red pill, of course, because he believes the “Wonderland” of truth theory where there is no reality and he’s trusting someone else’s binary choice, not his own.

I will go no further into the plot here. If I’ve piqued your interest, then go watch the film. However, be aware of the complex set of plotlines that can spring forth from a mind wanting to be manipulated. “When you take the blue pill and the story ends,” could mean the pill makes you feel secure knowing that there was an election, the bad guy lost and you are ready to go on with your life. You believe this because you’ve attached a thick layer of fact molecules to the various scenarios of life. You know the basement of that pizza place in Washington, D.C. wasn’t where babies were sacrificed for their blood to feed Democrat operatives. In fact, there is no basement in the Comet pizza establishment.

What about those who have taken the red pill? Well, they are seduced into various “rabbit holes” where they are forced to adopt, believe and fixate on whatever their handlers dish out. As they digest the large red conspiracy pill, brainwashers like Alex Jones, Tucker Carlson, Glenn Beck and Sean Hannity narrate their reality. These guys are not modern-day Morpheus-like leaders, they are agents of hate, lizard-like liars and armed conspiracy anarchists.

In the film, agents are the guardians within the computer-generated world of the Matrix, protecting it from anyone or anything that could reveal it as a false reality or threaten it in any other way. But be careful. Those taking the red pill are depicted as the heroes. Are you lost yet? Well, don’t get confused. People who say they are seeking the truth after taking the red pill can be traitors, like the character Cypher, played by Joe Pantoliano. They are picking the truth they want to believe, not the real truth.

Once someone goes down a rabbit hole, like Marjorie Taylor-Greene and Paul Gosar have done, they have totally given up cerebral control. They are compelled by a sinister need to shock, disrupt and interpret truth for those they believe will follow them down into the next rabbit hole. Whether it’s Jewish space lasers or Joe Biden sending “brown shirts” into Missouri to encourage “human experiment” vaccines, they are off their rockers. Paul Gosar has said, “If the Pope wants to devote his life to fighting climate change, then he can do so in his personal time. But to promote questionable science as Catholic dogma is ridiculous.” First, I am sure the Holy Father doesn’t punch a timeclock at the Vatican. Next, Mr. Gosar lives in a district that had the highest temperatures in the history of recordkeeping. He’s not going to burn in hell, his trousers are already aflame in his very own backyard. 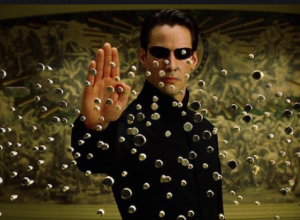 Which pill will you take? Will you trust a certain news source because they hold the pill? Do you really believe they would do anything to lower their ratings, such as telling the truth? Fox News deals not in truth. They are part of a Wonderland created by exploiters and con artist wanting to get your viewership and money. Donald Trump is like Agent Smith, The Matrix head agent out to capture and destroy those who disagree with his premise or opinion. Here’s a question, how would Donald Trump even know if the election was rigged? Seriously, he doesn’t know anything other than the shit he makes up or things members of the armed conspiracy anarchists tell him. He didn’t look at the ballots. He didn’t see bamboo in the ballots. He didn’t go to Comet Pizza and ask to see the basement. He wouldn’t know a fact if it blew into his bellybutton.

I took the blue pill a long time ago. I go to sleep at night, then wake up every morning believing in the facts as presented by truth-tellers. I never bought into Stephen Colbert’s “Truthiness,” instead thinking that black and white outlined facts and gray areas were designed for mood management and psychological stability. When Morpheus says the truth is something he cannot talk about, one must see it for themselves, he is right. The people who have been sucked into the deep dark rabbit holes are not helping America. We need to be deeply concerned they are in positions of power, and we must work to change that now. Even Paul Gosar’s siblings have said he should be removed from Congress and called him a traitor to this country. I am sure a more strongly worded reaction is forthcoming.

Take the blue pill, my friends, and stop wasting your time on trying to see things that aren’t real.

One thought on “WHICH PILL WILL YOU TAKE?”