I grew up in Pittsburgh, so I experienced hurricanes only on television. When my partner and I retired to Venice, Florida five years ago, we were greeted by Irma, our first hurricane. For that one, we put up the shutters and got out of town. Irma brought us only minor damage, the most serious being the live oak tree in the backyard being bent thirty degrees toward the house.

As for hurricane Ian, we decided to hunker down in our home and wait out the storm. We suffered from a ridiculous myth that Venice was built on a Native American burial ground and a direct storm hit couldn’t possibly happen. We were naïve, and wrong.

So, what did we learn from our encounter with the angry tempest, which the science guys call a CAT FOUR? Initially came all the traditional preparation, buying batteries of every denomination, filling the bathtubs with water, getting as much bottled drinking water as possible and putting up the shutters. That became my first lesson: know your limitations. As a senior, seventy-something guy I didn’t realize how out of shape I was and should have put on those knee braces before doing the work. By the time Ian hit, I could hardly move. 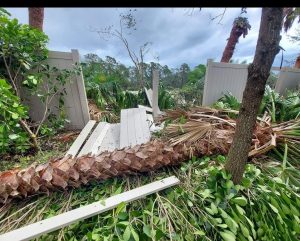 Our home was built under the strict codes of six to seven years ago, and it’s basically a concrete fortress. Ian brought us minimal damage, but that live oak repositioned by Irma is now on the ground, completely uprooted by Ian. I’m not sure living next to tall trees is advisable, but the state and county demand we have trees. Now that Ian knocked one down, we must replace it at our expense. Another lesson learned.

Taking pictures for a friend who owns a mobile home in a park, I saw Ian’s terrible wrath, and I’ve concluded it’s immoral for such construction to be allowed in Florida. The wind acted like a giant, demonic can opener, ripping apart the metal structures and destroying every carport. I’m surprised more folks weren’t killed. I understand mobile homes are a form of affordable housing, but Floridians shouldn’t live in them. Another lesson? If you live in an older or mobile home or in a low-lying area, don’t stay during a hurricane.

Now let’s talk about the power gird. Of course, we lost electricity. Ian made sure millions of other Floridians did also, but I’ll send props to those radio stations that managed to stay on the air. One nifty idea was several stations broadcasting the audio of their TV affiliates. Sadly, there are too many automated radio stations incapable of providing helpful storm reporting these days, so hats off to all the NPR stations with real news and weather experts, not disc jockeys faking it. Another lesson? Always have a radio on hand during a hurricane. I think you can still buy one.

Cell Phones are a problem during a disaster. Why? I heard a radio discussion where a caller said, “I thought with this G5 we would never lose service.” Well, until the government mandates phone company towers have generators or powerful solar batteries, your relatives up north watching the disaster coverage on TV will assume you are dead. We need a better system of communication, and it is well past time to demand the cash rich phone companies step up and reinforce their systems. They should have already done this.

We learned our book reading lights came in handy, strategically placed throughout the house and tapped to supply dim lighting in the rooms. That Sharper Image miner’s light I bought a few decades ago also came in handy.

This brings us to post storm. Oh, the wind was cool and pleasant, but don’t think opening the windows and getting a good night’s rest was possible. The drone of generators on our street was so loud it was like living in a beehive. And instead of burning gasoline for hours, isn’t it time for us all to have solar panels that feed a large Tesla-like battery that can power our homes for forty-eight to seventy-two hours? Climate change, and thus massive hurricanes are here to stay. Let’s start using the sun to get through them.

Then there’s the drainage systems. Our street water must travel a pipeline that eventually lands in a swale, which drains into the Myakka River. However, the system appears to be stuffed up and ineffective at moving water out of our subdivision. The county experts need to step up and tell us why. Maybe it’s time to invest in a more substantial infrastructure instead of flying immigrants to Martha’s Vineyard. Let’s reallocate that money to helping Florida. 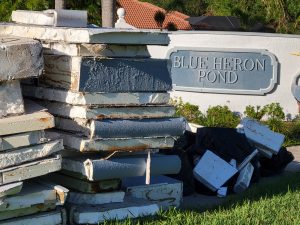 Old buildings without substantial engineering improvements will never be able to deal with a CAT FOUR or FIVE. Even our Venice Theater, which was recently remodeled, had its roof blown off. I believe it’s time to have serious talks with our vendors, contractors and builders about the fortification of our cities and towns. In Venice’s historic district, several of those brand-new, decorative, black metal streetlamps crashed to the ground. What are their wind ratings? Also, why on earth was all the red paint blown off our stop signs? And those slick talkin’ builders who put up “walls” around your community, well, one of them on Venice’s east side was blown away by the hurricane and revealed the wall was made of Styrofoam! What the hell?

Irma may be forgotten, but Ian continues to affect us and that will probably continue for years. It’s time to figure all this out and reinforce against the next one! Future storms will be just as powerful because the earth is too hot. Stop ignoring the realities and find smarter people who can make better plans.

Now, here’s one final experience. All the comradery and community we experienced right after the storm, with folks pitching in to help one another, melted away in a few weeks. Just the other day, one of my neighbors rattled off how much he hates President Biden. I didn’t ask his opinion, his was an unsolicited remark. So, you see, people don’t change. They forget.